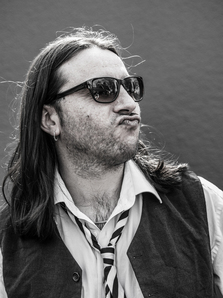 Javier Infestas Maderuelo was born in Segovia and raised in Salamanca, Spain. He started playing percussion at the early age of 8, when he began his studies of classical percussion in the Elementary Conservatoy of Salamanca. During this early years he started to discover and to love the wide word of the percusion. When he was 15 years old he started to play in different young Orchestras as “Joven Orquesta Sinfonica de Castilla y Leon” or “Joven Orchestra Sinfonica Ciudad de Salamanca” and to participate in many summer percussion workshops all around Spain. At the age of 18 he started the studies of Philosophy in the University of Salamanca alongside with his musical studies, but one year later he decided to become a professionl musician, stopping with his University studies and preparing the entrance exam to the Bachelor in Classical Percussion at the “Conservatorio Superior de Salamanca”. During these years he expanded his experience as sinfonic musician collaborating with more young orchestras, as JONDE (Spanish youth Orchestra) or JOICO (Joven Orquesta Internacional Ciudad de Oviedo), and some proffesional Orchestras, as “Orquesta Sinfonica de Castilla y Leon” or “Orquesta Sinfonica de Burgos”. During the last years of his education he also got very involved in Contemporary music, performing many premieres of young spanish composers, and the recording of the Album “Gerardo Gombau: Obra Completa para conjunto instrumental”.

Always he combined his studies of classical music with the passion for folkloric music, getting involved in different proyects as rock bands, flamenco gruops or percussion ensembles.

In 2008 he obatain his Bachelor of Classical percussion and he decided to look for a new place to expand his skills and he found Rotterdam (The Netherlands), a place like almost no other in Europe to go on with his calssical music and start to expand his knowlege in folkloric music. This first year in Rotterdam will make a breaking point in his career. After 6 months living there, having different amazing experiences out of the Classical world, he decided to start a new path in his career and follow what his heart told him. Since then he is focused in the folkloric music, specially in Flamenco, Latin and Brazilian music, playing as member of many projects, as Buyakano, Los Paja Brava, Flamenco Verkeerd, etc, and collaborating with many different musicians and bands, as Mdungu, Gerardo Rosales, Carlos Ema...

Right now he is stablished in Rotterdam, where he develops his proffesional career toghether with his personal projects (Buyakano and Los Paja Brava), different flamenco shows, and his teaching career, being the percussion teacher of the music school “Erasmusica”, a project developed in the “ErasmusUniversity", and teaching private percussion lessons.